Longlining and sharks – an unintentional destiny? 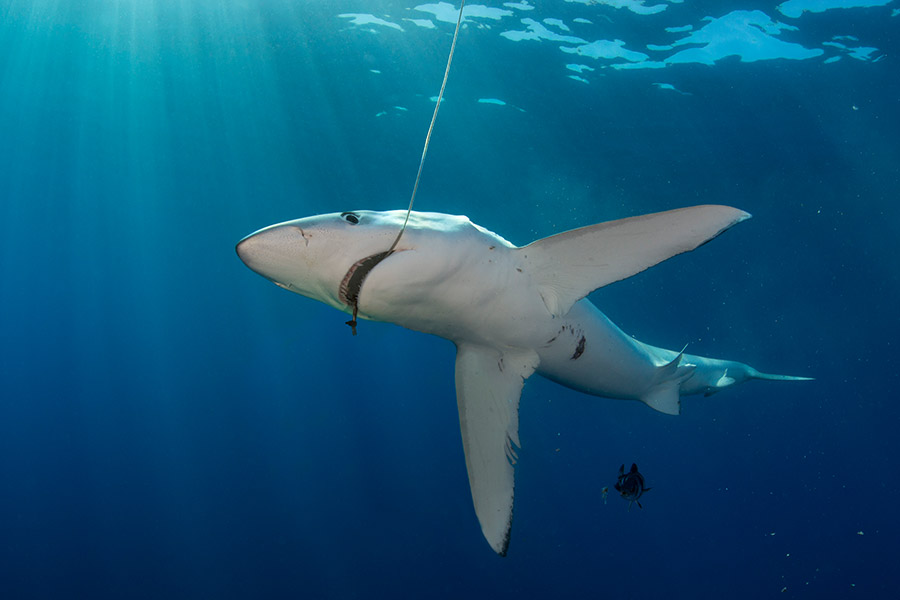 Longlining is still a quite common practice in today’s fisheries – It is basically a line attached to a boat, equipped with baited hooks in a certain interval to attract target fish. In industrialized fisheries, the line is usually dozens of miles long, the number of hooks can go from hundreds to thousands per line. Depending on the target, the lines can be set at different depths, in midwater or groundwater, attached to the ground or floating on the surface with buoys, like “going with the flow”. But it is not as simple as is looks: Despite certain improvements in longline fisheries, the bycatch, which is the unintentional catch of non- target fish, is still rising.

Among these bycatch rates, shark populations suffer the most: For every Swordfish caught, two sharks are killed. Some sharks might be able to set themselves free from the hooks, but never without injuries. Additionally, as sharks need a long time to recover from these disturbances, their populations are mainly declining because of this kind of fisheries.

Among sharks, the Blue Shark Prionace glauca is the most affected species. But how exactly is this possible? And why is this still a present issue? And what can you do?

Let us switch roles: Swimming at a depth of around 350 meters, accompanied by several other fellows, Blue Sharks are looking for food. They are usually found in temperate and tropical regions, in the Atlantic, the Pacific as well as in the Indian Ocean. They are constantly moving in order to breathe through their gill slits, travelling miles and miles for prey. Blue Sharks are not very picky: cuttlefish, octopuses, lobsters, crabs, smaller sharks and bony fish are on the menu. They are known for diving into deeper depths, even until the bottom. They also feed on cod and tuna, which is one of the most targeted species of today’s longline fisheries, and this is where the problem begins:

The hungry Blue Shark, while swimming loads of miles, has a certain sense for struggling prey: With the ampullae of Lorenzini, which are electroreceptors based in the head of the sharks, they can sense differences of the electric fields in the water. As all living organisms produce electric fields, e.g. through movement or any other muscle contractions, sharks easily can sense this potential difference in the electric field and move towards the sensed direction. With this “super- power” they can detect their prey, like the famous tuna, even at large distances without even seeing or smelling them. Once sensed, the Blue Sharks will go hunting for the prey, usually in groups, as teamworking increases their chances. But as soon as they are trying to catch their prey, they get troubles themselves: Blue Sharks usually hunt in the way that they encircle or herd the prey. As they attack the prey, they get easily trapped in the hooks. They constantly must move in order to breathe through their gills, so they might entangle themselves even more. But Blue Sharks do not give up easily: Once realized that in trouble, the Blue Shark will fight until the last minute, trying to disentangle itself by releasing the prey, quick movements and quick swimming behavior. After quite a long time, the Blue Shark can be free and escape. But this maneuver comes with a price: Usually, the Blue Shark through the heavy life- saving movements, suffers from severe injuries inside and around the mouth, sometimes even deep scratches on her whole body. In some cases, the Blue Shark might even ingest the hook, causing internal bleeding and blockages.

Depending on the severity of the wounds, the Blue Shark will survive after the escape, but only after a long time of recovery. In this unfortunate state, they are highly likely to be eaten by their own predators, which are sea lions, Mako sharks, Killer Whales and White sharks. In the worst- case scenario, the Blue Shark might finally succumb to its injuries, in a long painful way, somewhere alone at the ground of the sea.

The Blue Sharks are the most widely- distributed shark species, found almost all over the worldà therefore they are so prone to longline- fishing or any other fishing practice.

In certain circumstances, and here the numbers are unfortunately increasing nowadays, the Blue Shark cannot disentangle and free itself but stays stuck in the hooks for hours. As if this was not already horrible enough, the nightmare continues: Once the sharks are fully entangled in the hooks and the longline is retrieved by the fishermen, the scenario continues on land: Any bycatch- species should be, theoretically, carefully released from the hooks and softly put back into the sea. But nowadays, these shark- bycatch are used for another reason: Finning. On the vessel, fishermen may decide either to keep the whole shark (usually unreported) or to even chop off the shark’s fins. As you can see on our website, https://www.stop-finning.eu/finning/, the sharks’ fins are brutally cut off, meanwhile the shark is alive and feels all the pain (sharks have a similar nervous system than humans, a Central Nervous System, which makes them feel pain like humans).

After this torture, fishermen usually throw back the remaining and bleeding bodies of the sharks, while keeping the fins for future sale. Sharks cannot survive without fins and these deep harms, so they are sentenced to death when thrown back to the sea.

As already mentioned, most bycatch- rates often remain poorly reported or even unreported, which is the reason why it is, until today, difficult to track down these unethical and cruel ways of fishing. Only with your help, by signing our citizen`s initiative at https://www.stop-finning.eu/, you can stop this cruel, illegal and irresponsible behavior.

According to the IUCN, the Blue Shark Prionace glauca`s status is Near Threatened – this means that the population of this species is sinking and may become threatened soon.

Until now, there is no reliable statistic for the catches of the Blue Shark. What is known so far is that catches were reported in Spain, France and Denmark, consumed mainly in Spain, Italy, Brazil and France, but numbers are not accurate. As you can see – the European Union is a big player in this illegal trade. Get active and VOTE! 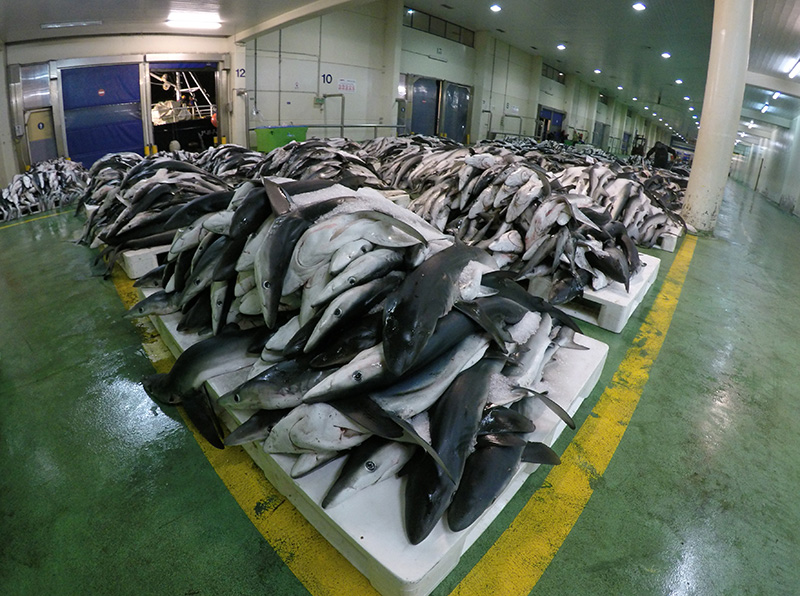 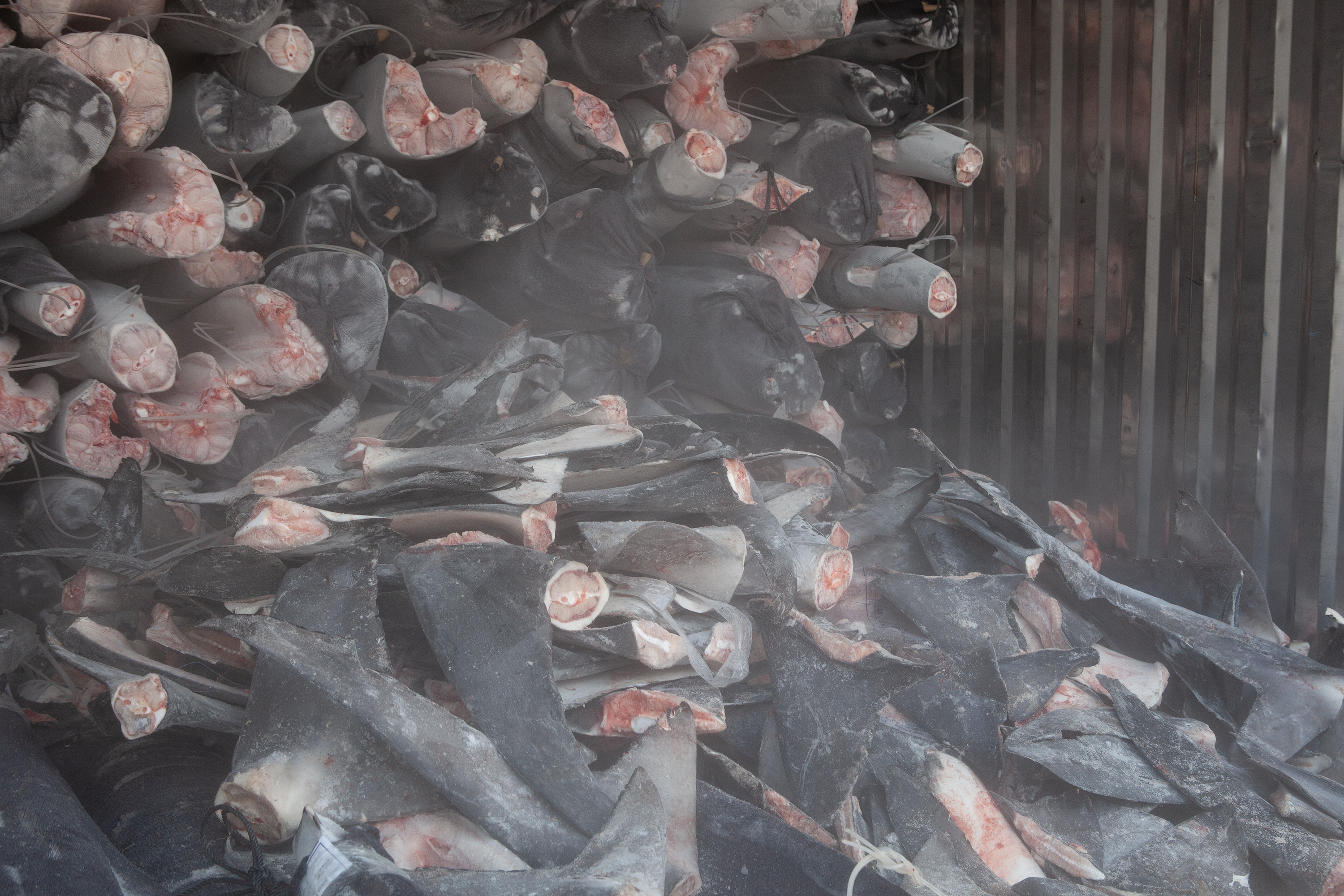